Today’s e-liquid review will be for the bubblegum millions e-liquid from I VG (formerly known as I Love VG) which is part of their I VG Sweets collection.

The juice comes in a 60ml shortfill bottle with 50ml of e-liquid.  For those that aren’t familiar, you can add an 18mg 10ml nicshot to this to make it into 60ml of 3mg liquid.  For this review, I didn’t add a nic-shot and just vaped it as plain 0mg.

As usual, this liquid was tested with:

Immediately after opening the cap, I was hit by a strong smell of bubblegum, which seemed really promising.  A sweet, bubblegum that was reminiscent of Wrigleys Juicy Fruit.

From the brand name, you might think that the juice is really high VG whereas in fact it’s only 70VG which I guess puts it at the bottom tier of what I’d call high VG.

After soaking a fresh wick in this liquid, I set the mod to a low wattage (40W) to get started.  As expected, on the low wattage, there’s very little vapour produced, but the flavour was mainly just an icy/cool hit that was really overpowering.  Under the ice, there was a hint of something sweet but not quite distinguishable.

At 50w, the coolness was less noticable and the millions flavour started to come through.  The cloud production was still quite minimal and it wasn’t still quite possible to exhale slowly and enjoy the vapour coming out.

Taking up to 60w was another improvement.  The balance of ice and bubblegum was better and I could start to see the “bubblegum millions” flavour start to come through, yet the vapour still was less than satisfying and the ice was still a bit too strong.

70w certainly hit the “sweet” spot for me; the ice became weak enough to be an aftertaste, so it seems that this is something that you’re expected to vape at higher wattages for the best flavour reproduction.  I then tried in my tank and found the same, the ice hit was even stronger at the same wattages as the RDA, but did get weaker at higher wattage.

As far as calling it “Bubblegum Millions”, I don’t think that’s quite right.  The key note in the flavour was certainly the ice, with a mix of sweet, fruity bubblegum so a more suitable name would be “Bubblegum Millions On Ice” for me.  This flavour is certainly worth trying if you’re a fan of e-liquids with “ice”, but not something I’d put into a sweets/candy range.

You’ll notice that the ice component is both a strength and weakness of this e-liquid, reason being that from the name it was certainly not what I would have hoped for or expected, but it is something that you can still enjoy if you’re into icy liquids.

Note that the flavour match score is based on when it tasted best for me (at 70w).  I initially had it down at 4.4 based on the 60w taste. 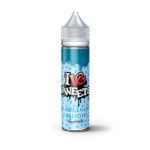 […] iciness does seem to be a common trend in I VG e-liquids – I noticed the same thing in the Bubblegum Millions e-liquid review from a few weeks ago.  Drumstick lollies are supposed to be a combination of raspberry and milk, […]